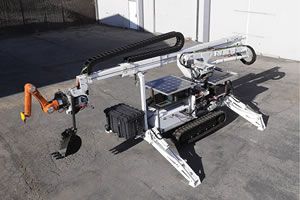 Evan Ackerman for IEEE Spectrum: Construction seems like an industry that, were I still living in Silicon Valley, I would be tempted to call "ripe for disruption." Researchers at the MIT Media Lab agree, pointing out in a paper just published in Science Robotics that construction "relies on traditional fabrication technologies that are dangerous, slow, and energy-intensive." Hey, sounds like a job for some robots, right?

Tim Boreham for The Australian:  According to Fastbrick Robotics chief Mike Pivac, the art of bricklaying hasn’t changed much in the past 5000 years.  For brickies’ labourers in particular, it remains an unsafe and back-breaking game of messy mortar-mixing and lugging hods at height or over uneven surfaces. Backed with seed funding from the publicly listed Brickworks, Mr Pivac and his cousin Mark have devised a robotic bricklaying machine to eliminate the drudge work.  About the size of a garbage truck, the prototype Hadrian 105 unit can erect an average house in one to two days, within an accuracy of half a millimetre.  That’s far more accurate than the brickies’ time-honoured string and spirit level method. Led by Cygnet Capital, the ­Pivacs have been on an investor roadshow ahead of a $3 million raising and reverse IPO, via the shell of former winery owner DMY Capital.  Interest has been enormous, with inquiries from as far afield as Saudi Arabia and Russia.  “We had 500,000 hits on our website in just over five days,’’ Mr Pivac says.  “We have had interest from 35 countries, including some outstanding big organisations.’’  Cygnet Capital director of ­corporate finance Darien Jagger says no other IPO has attracted as much interest.  “We have fielded thousands of emails from all sorts of parties.’’  The Hadrian unit has already demonstrated end-to-end construction, without the need for human intervention. The innovation lies not with the robotic arms, but the laser-guided system that allows the bricks to be placed accurately.  “If you put this machine on a rocking boat it would lay a house on the shore correctly to an inch or two,’’ Mr Pivac said.   Cont'd...