Terry Dawes for Cantech Letter:  Vancouver-based Chrysalix Venture Capital has announced a €100 million fund aimed at driving the global robotics revolution, in partnership withRoboValley, a centre for robotics commercialization based at the Delft University of Technology in the Netherlands. The RoboValley Fund is Chrysalix’s first robotics fund, and will concentrate on disbursing seed and Series A rounds of funding to early-stage companies developing component technology, intelligent software, and other breakthrough robotics technologies. “Robotics is predicted to be the next big step in the digital revolution having an unprecedented impact on the way that we live, and provides an answer to some of the grand challenges of the 21st Century,” said RoboValley managing director Arie van den Ende. “Together with Chrysalix long-standing expertise in commercializing early stage industrial innovations, the RoboValley Fund will bring much needed capital and accelerated paths to market for our most promising next generation robotics technologies.”   Cont'd... 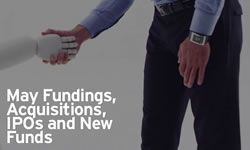