04/06/16, 05:13 AM | Mobile Robots, Other Topics | Safety and Standards
Industry Connections Program to identify needs and build consensus for standards, certifications and codes of conduct regarding the ethical implementation of intelligent technologies

Safety is a complex topic, but these six factors are helping to not only increase workplace safety this year but also efficiency, quality and employee well-being. 08/13/15, 09:44 AM | Industrial Robotics, Other Topics | Safety and Standards
Knowing exactly where and what task a robot will do next can help workers avoid injury.

How Does the Accident in Germany Affect Industrial Robot Safety? 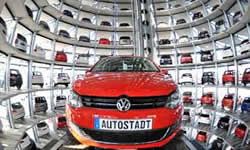 by Patrick Davison, Director of Standards Development, Robotic Industries Association:  Last week, an unfortunate fatality involving an industrial robot and a worker occurred at a Volkswagen plant in Baunatal, Germany.  The Robotic Industries Association (RIA) and its member companies express its deepest sympathies to the victim’s family, friends, and colleagues. According to news sources, the worker was part of a contracting crew responsible for setting up the robot, and was working inside the safeguarded space when the incident occurred.  A second member of the contracting crew was standing outside of the safeguarded space and was not harmed. The international media response to the incident was aggressive, swift, and expounded on topics that were not relevant to the incident.  AWashington Post article referenced the dangers of Artificial Intelligence and posed the question, “Should the world kill killer robots before it’s too late?”  In another story, a Financial Times journalist with a name similar to a popular character in The Terminator franchise started a social media frenzy with a tweet.  A video from Ireland expounds on random tweets regarding the incident with backdrop footage of the Honda ASIMO robot and manual automotive operations.  Also, according to this article on an automotive news and gossip site, a Times of India article posted a photo of a gun-wielding toy robot beside the story.   Cont'd...