The Amazon Robotics Challenge. And, the winner is...

06/01/15, 10:26 AM | Industrial Robotics, Unmanned & Other Topics | Awards | Barrett Technology
Of 25 teams from around the world, the winner of the Amazon Robotic Bin-Picking Challenge is the Technische Universität Berlin using Barrett's WAM robotic arm.

05/26/15, 07:47 PM | Industrial Robotics, Unmanned & Other Topics | Awards | Festo
Robot Revolution, supported by Google.org, premieres May 21 in Chicago and will then tour the nation.

05/18/15, 10:03 AM | Industrial Robotics, Unmanned & Other Topics | Awards, Darpa
Winners created compelling short videos about the future of robots in society and will get the chance to discuss their ideas and see current cutting-edge robots in action 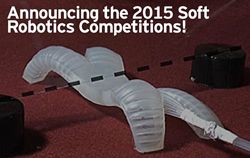 The 2015 Prize for Contributions in Soft Robotics rewards academic researchers for sharing their work and advancing the field. The competitions include $10,000 in prizes!

18,000+ Students Bring Their Custom-Built Robots and Team Spirit to the Largest Sport for the Mind™ Showdown, the 2015 FIRST® Championship

Stäubli is a pioneer in the construction and development of robotic tool changing systems. Our customers benefit from our many years of expertise in all industry sectors, as well as our modular product concept, which offers three efficient solution paths: MPS COMPLETE offers preconfigured robotic tool changers for immediate use. MPS MODULAR allows the user to determine the configuration, while MPS CUSTOMIZED allows the construction of special, application-specific systems.
More Industrial Automation, Robots and Unmanned Vehicles Products | Feature Your Product