Rich Haridy for New Atlas: In an interview with Defense One, Atuar states the current device can carry and fire a variety of different weapons up to a weight of 22 lb (10 kg),

Kris Osborn for Defense Systems: "SCORCH is a system consisting of intelligent UAS autonomous behaviors and an advanced user interface that allows a single operator to effectively control up to three UAS simultaneously,"

05/31/17, 05:28 AM | Mobile Robots, Other Topics | Military and Security
SMP Robotics S5 Security Robot lineup enhanced with NVIDIA Jetson TX2 platform was presented at NVIDIA GTC Conference in San Jose. TX2 enables the robots to learn from their environment and make decisions according to what is happening around them.

05/18/17, 05:31 AM | Mobile Robots, Other Topics | Military and Security
Selection focuses on corporate culture and policy that serves veterans

Melia Robinson for Business Insider: On a recent night outside the offices of Knightscope, a robotics startup in the heart of Silicon Valley, a middle-aged man allegedly toppled a five-foot tall, 300-pound robot to the ground.

05/16/17, 09:08 AM | Mobile Robots, Other Topics | Military and Security
First customers include U.S. and Canadian Militaries

Security Robots Made in Silicone Valley Come to Brazil

05/16/17, 05:35 AM | Mobile Robots, Other Topics | Military and Security
Proterisco, the official distributor of SMP Robotics in Brazil chose ISC Brazil to introduce S5 Security Robot (Robocom) to the Brazilian market 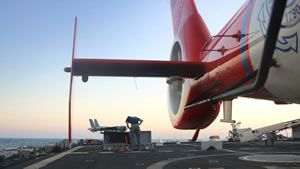 Neha Thirani Bagri for Quartz: The drone takes into account things like a vessels size, cargo, and movement, to determine if it might be a security threat. When a "target of interest" is detected, a go-fast boat is launched, and the chase begins.

04/28/17, 05:31 AM | Mobile Robots, Other Topics | Military and Security
INTERPOL World 2017 is set to bring law enforcement agencies, government bodies, academia, security professionals and solution providers together over three days of networking and information exchange this July. The global exhibition and congress aim to stimulate collaborations between stakeholders to address crimes in the future.

Jen Judson for Defense The Army is poised to transform the ground robotics industry over the next year as it launches several competitions to define its future unmanned ground systems fleet.News:

Joel Griffin for Security InfoWatch: The thought of using robots as guards may seem like a far-fetched notion to some, but the technology itself is already mature and starting to gain traction in the security industry.

Drones and robots are headed to ISC West 2017

Spencer Ives for Security Systems News: The Unmanned Security Expo will have its own section of the show floor, marked by banners and different colored carpeting. The area will feature a "flying cage" that allows ground-based robots and aerial drones to display their movement capabilities. The expo currently has about 30 exhibitors, according to Sessa, with more still joining as of mid-March.