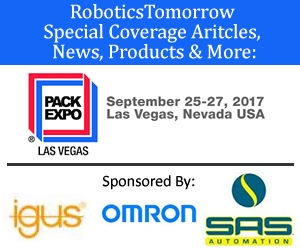 PACK EXPO was held from September 25th - 27th in Las Vegas. This RoboticsTomorrow.com Special Tradeshow report aims to bring you news, articles and products from this years event.

PACK Expo will be held from November 6th - 9th in Chicago, Illinois. This RoboticsTomorrow.com Special Tradeshow report aims to bring you news, articles and products from this years event.

Eugene Kim for Business Insider:  It wasn't until 2014 that Amazon really started to use the machines made by Kiva, the robotics company it bought for $775 million in 2012. Kiva makes robots that automate the picking and packing process at large warehouses. But in the short two years they've been deployed across Amazon's warehouses, Kiva's robots have been a real cost saver, according to a new note published by Deutsche Bank on Wednesday. The note says Kiva robots have cut operating expenses by about 20%, quoting Amazon exec Dave Clark, adding that it would translate to roughly $22 million in cost savings for each fulfillment center.  Additionally, Deutsche Bank estimates Amazon could cut another $800 million in one-time cost savings once it deploys more Kiva robots across the 110 fulfillment centers that don't have them yet. Amazon uses Kiva robots in only 13 of its fulfillment centers currently.   Cont'd...

How Robotics Help Speed Up Delivery of CPG to Store Shelf

04/12/16, 05:54 AM | Mobile & Service Robots , Factory Automation | packaging | Axium
Luckily, robotics can adapt to changing sizes, using end-of-arm tools that can adjust their grips on the items that need to be handled.

Robotics in the Folding Carton Industry: The Human Factor

As they watch fellow companies successfully use robotics, see what it takes to switch to a fully or semi-automated system and be reassured by a human back-up system, it seems inevitable that more folding carton manufacturers will soon be adopting robotics. 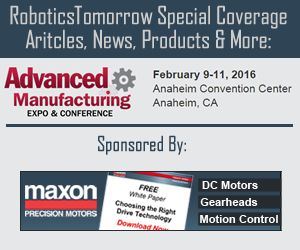 Advanced Manufacturing Conference & Expo 2016 will be held from February 9th - 11th in Anaheim, California. This RoboticsTomorrow.com Special Tradeshow report aims to bring you news, articles and products from this years event.

DAVEY ALBA for Wired:  Locus Robotics is an offshoot of Massachusetts-based Quiet Logistics, a third-party order fulfillment company that gets merchandise out the door for big apparel retailers like Zara, Gilt Groupe, and Bonobos. And the idea behind its bots isn’t just to replace humans, but to create a system where everyone can work together more efficiently. What most people don’t realize in the age of push-button shopping is the “shopping” part doesn’t disappear. You the consumer are no longer at the store doing the physical work of tracking down the thing you want. But somebody still has to do it. For e-commerce, that task typically falls to a worker at a distribution center who must locate the product, make sure it’s not damaged, and send it off to be packed and shipped. This can be grueling, tedious work. More than anything else, it’s about walking. Lots of walking. Locus aims to have its bots do the walking instead.  Cont'd...