Our technology enables organizations across a wide spectrum of industries, from public safety and oil and gas to telecommunications and utilities, to integrate drones into daily workflows to reduce costs

How Utilities can use Drones in Planning a Resilient Power Supply

Batteries, the Heart of Your Drone

Does your battery have the ability to report battery statistics to you while it is airborne? Are you sure that battery will work for your important demo?

These embedded module solutions or COM are being used in an increasing number of drone applications because they allow for a greater degree of flexibility, scalability, as well as longevity, within a very small form factor.

Is Drone Delivery Good for the Environment? 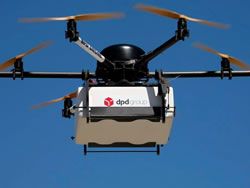 Constantine Samaras and Joshuah Stolaroff for Smithsonian: Reducing the need for trucking by delivering some packages with electric drones could save fuel, and potentially carbon emissions. But how much?

02/06/18, 08:51 AM | Unmanned & Other Topics | drones, Tradeshows and Conferences
As you can see, the continued growth in the creation of drones only shows the shocking improvement in the world of software and tech devices. Just like Artificial Intelligence, its another fantastic glimpse into the future!

Katie Fehrenbacher for GreenTechMedia: For drone makers, that means a drone could fly farther and longer on a single charge. For example, a drone surveying acres of crop land could fly for an hour instead of just 20 minutes with a standard battery.

RoboBusiness Direct is built to foster robotics innovation in all its forms, expand robotics business opportunities, and build a community of like-minded problem solvers with the goal of driving the growth of robotics businesses. More than a webinar or virtual event, RoboBusiness Direct is an ongoing, integrated series of presentations and media coverage delivered by brightest minds from the leading robotics and automation companies from around the world - Nuro, FedEx, Lockheed Martin, Samsung, Siemens and more.
More Industrial Automation, Robots and Unmanned Vehicles Products | Feature Your Product