As a human, you have an intuition about how a good movement looks. Transferring that intuition to the robot happens more naturally through guiding than through writing a sequence of motor control commands. 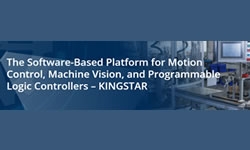 The use of a Real-Time Operating System (RTOS) is increasingly common in embedded software designs.

Unlike other solutions, AImotive's full stack software uses the power of artificial intelligence to "see" fine detail and predict behavior, making it easier to manage common driving concerns such as poor visibility and adverse conditions.

Symmetric Multiprocessing or Virtualization: Maximizing the Value and Power of a Soft-Control Architecture

For a truly simplified and streamlined architecture that is high-performing, scalable, efficient. and built for long-term value, an SMP-enabled Soft-Control Architecture is recommended.

In the relentlessly changing world of technology, several important advances and trends have emerged that allow OEMs to transition to a soft control architecture that will not only move them away from dependence on FPGAs and DSPs, but also change the basis of competition in the equipment and machine tool industries.

02/12/16, 05:02 AM | Unmanned & Other Topics | Software and Smarts
Researchers at the University of Zurich, the Università della Svizzera italiana, and the University of Applied Sciences and Arts of Southern Switzerland have developed software enabling drones to autonomously detect and follow forest paths. With the new drones, missing persons can be found and rescued quickly in forests and mountain areas.

Adam Fabio for Hackaday:  [Kevin Harrington] loves robots, but hates reinventing the wheel every time he creates a new machine. He’s built BowlerStudio: A robotics development platform to combat this problem. BowlerStudio was asemifinalist in the 2015 Hackaday Prize. BowlerStudio is a soup-to-nuts platform for creating all sorts of robots. [Kevin] has integrated Computer Aided Design (CAD), 3D modeling, kinematics, machine vision, and a simulation engine complete with physics modeling into one whopper of a software package. To prove how versatile the system is, he designed a hexapod robot in the CAD portion of the program. The robot then taught itself to walk in the simulation. Once the design was 3D printed, the real robot walked right off the bread board. [Kevin] linked the hardware and software with DyIO, another of his projects. BowlerStudio is a huge boon for just about any robotics hacker, as well as educators. An entire curriculum could be created around the system. Thanks to its Java roots, BowlerStudio is also a multi-platform. [Kevin] has binaries ready to go for Windows, Mac, and Ubuntu.   Cont'd...