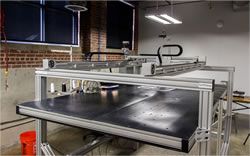 Groundbreaking developments in recent years in the fields of Robotics and AI have allowed the textile industry to progressively adopt automation in their manufacturing processes.

How the Combination of Robotics and AI Can Transform Industries

A Code of Ethics for AI - Mission: (Im)possible

As practice shows - despite an array of benefits it brings - AI can significantly harm humanity. One way to avoid negative consequences is to create an AI code of ethics, for example, in accordance with the international human law.

Musashi AI consortium is a direct result of this need and is focused on enabling the manufacturing industry to take massive leaps forward to reach the full potential that AI and the smart factory will bring to bear.

How Do You Know If Your Company Is Ready For AI?

Regardless of the size of the company or industry in which it operates, adding automation into a business environment can mean a significant shift in the way an organization conducts itself.

CES 2019 Proves AI and 5G Will Transform the Future

The impact of AI and robotics on employment goes far deeper than just job creation. AI, and subsequently, robotics, are niche technologies that demand an extensive understanding of every associated parameter.

AI Could Beat Humans at Everything by 2030

Specialized AI applications will become both progressively ordinary and more useful by 2030, improving our economy and quality of life.

A.I.-equipped Robots to Take on Task of Inspecting Piers and Bridges More Frequently

Researchers at Stevens Institute of Technology are developing algorithms that teach robots to adapt to the constantly changing dynamics of the sea in order to address one of our nations greatest concerns: protecting and preserving our aging water-rooted infrastructure.