If I make a change on a design, I have to be able to apply the changes quickly. And since we are competing against bigger, high-end eyewear manufacturers, we have to deliver the highest quality even if we do quite smaller productions.

Phys.org:  Soft robots do a lot of things well but they're not exactly known for their speed. The artificial muscles that move soft robots, called actuators, tend to rely on hydraulics or pneumatics, which are slow to respond and difficult to store. Dielectric elastomers, soft materials that have good insulating properties, could offer an alternative to pneumatic actuators but they currently require complex and inefficient circuitry to deliver high voltage as well as rigid components to maintain their form—both of which defeat the purpose of a soft robot. Now, researchers at the Harvard John A. Paulson School of Engineering and Applied Sciences (SEAS) have developed a dielectric elastomer with a broad range of motion that requires relatively low voltage and no rigid components. They published their work recently in Advanced Materials.   Cont'd...

04/21/16, 05:08 AM | Industrial Robotics, Factory Automation | Clamping and Gripping
The pioneer in grippers is now offering its customers a pneumatic parallel gripper in the form of the GPP1000 series.

01/25/16, 01:23 PM | Industrial Robotics, Factory Automation | Clamping and Gripping | SCHUNK Inc.
The EGP from SCHUNK is the electric small part gripper with the most compact performance on the market. SCHUNK expanded the EGP series with a smaller size (25) which weighs 110g and has a stroke of 3 mm per finger.

08/06/15, 08:40 AM | Industrial Robotics, Unmanned & Other Topics | Clamping and Gripping | SCHUNK Inc.
This unit allows highly dynamic and smooth pick & place operations in confined spaces of the complex assembly plants, assembling electronics, medical, and consumer goods with rotating angles of 90° or 180. 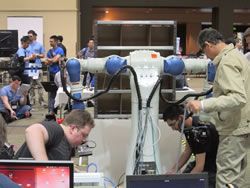 By David Szondy for Gizmag:  One of the biggest events at the recent 2015 IEEE International Conference on Robotics and Automation (ICRA) in Seattle was the first Amazon Picking Challenge, in which 31 teams from around the world competed for US$26,000 in prizes. The challenge set entrants with the real-world task of building a robot that can do the same job as an Amazon stock picker.According to Amazon Chief Technology Officer Peter Wurman, who initiated the challenge, the task of picking items off the shelf may seem simple, but it involves all domains of robotics. The robot has to capable of object and pose recognition. It must be able to plan its grasps, adjust manipulations, plan how to move, and be able to execute tasks while noticing and correcting any errors. This might suggest that the robots would need to be of a new, specialized design, but for the Picking Challenge, Amazon made no such requirement. According to one participant we talked to, the more important factors were sensors and computer modelling, so ICRA 2015 saw all sorts of robots competing, such as the general purpose Baxter and PR2, industrial arms of various sizes, and even special-built frames that move up, down, left or right to position the arm. Even the manipulators used by the various teams ranged from hooks, to hand-like graspers, and vacuum pickups.   Continue reading for competition results: